bbgun said:
It's just depressing. You look forward to football all year and your season is effectively over in WK1. This is about as down as I've ever been on Prescott. Played scared all night, threw a hideous pick, missed a wide open receiver, and didn't elevate anyone. $40M my ass. Even if he returns, he'll be at like 80% capacity. Arrogant Jerry did nothing at receiver or backup QB and we're about to reap the rewards. Every trick play blew up in our face, Pollard couldn't pick up blitzes, Steele had four penalties alone and the non-doomsday defense got gashed on the ground. Other than that it was a great night.
Keep reading...

I dont see how you or any fan can continue to be optimistic with jeri & spawn in charge, hope is dead (like my fandom) & they'll never win jack shit again.

I've been saying this since 1995, the ownership cannot be overcome and the wisest thing all fans could do is ignore the team and everything related to it but they wont so jeri, et al have license to do whatever the hell they want (except winning) while giving the fans a big middle finger year in and out in perpetuity

jeri is so deluded he thinks fans abide because of him when in reality they do so, to their own detriment, in spite of him

What kind of dumbass would have picked Denver in a survivor league?
Oh wait, that was me...

Maveric said:
What kind of dumbass would have picked Denver in a survivor league?
Oh wait, that was me...

That was some epic level Jason Garrett play calling to end the game. Take the ball out of the hands of the guy you gave up mega picks for and try a 64 yard FG. Just awful......

I'm still perplexed. A FG there never even entered my mind.

Did the HC simply say he trusts a kicker more than his new QB?

And they had options for plays, when they were stacking the box Williams was drifting open with no one to cover him. Probably could have gotten five easily...

This is pretty interesting. The football scout breaks down most of Tyler Smith’s 69 reps from yesterdays game. Not a bad showing for the kids first ever NFL game. Especially after only practicing at tackle for one week after playing guard all off season.

Scot said:
This is pretty interesting. The football scout breaks down most of Tyler Smith’s 69 reps from yesterdays game. Not a bad showing for the kids first ever NFL game. Especially after only practicing at tackle for one week after playing guard all off season.

Was definitely one of the very few bright spots from that otherwise dreadful performance.

After the way he played in the playoff game and again Sunday night, I honestly don't care for him to rush back into action.

It's only one game but this one is really surprising. I guess maybe Joe Philbin isnt such an OL guru after all.

If true, kind of interesting. I think most assumed the Cowboys don't play any starters in preseason because Tweedle Dee and Tweedle Dumb want it that way, but Spawn suggests McCarthy and the coaches did this on their own.

It's still lame to not point out how poorly their franchise QB played though.

Spawn named Cee Dee Lamb specifically as "someone that has to be better" (which is true, he dropped another key pass the other day on 3rd down) and from time to time him or his dumbass dad have called out others, but never do they mention Dak.

Prescott had ample time on many throws the other day and didn't connect. He was inaccurate on quite a few throws, not giving our guy any chance to make the play. He misread several coverages badly and Broaddus says the all-22 show several examples of players being open at the 2nd or 3rd level and Prescott refusing to throw there, and instead checking down to shorter underneath throws or just failing to even notice the guy wide open.

I don't worship PFF grading (like some) but it worthwhile to at least look over their grades and comments and NBC references PFF grades when they show the starting lineups. They def have some head scratchers sometimes but they do at least put some thought into it.

Based on my own observation from the game the other night I came away believing Dak Prescott was the worst player on the field.

Today I noticed that PFF agreed with me, and assigned Prescott the lowest grade for any of our players at 37.4, which is pathetic.

It's Cooper Rush time, for now​ 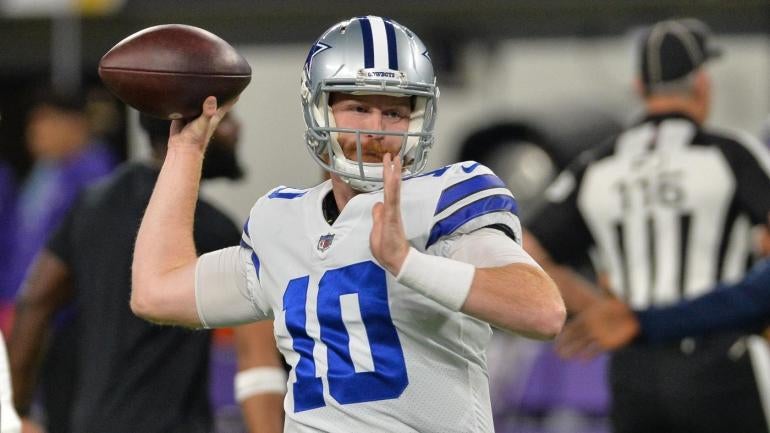 USATSI
The Cowboys didn't just lose an ugly season opener on Sunday night, falling 19-3 to the Buccaneers in a dismal offensive showing. They also lost one of the few remaining stars of their offensive lineup, with quarterback Dak Prescott set to miss multiple games after requiring hand surgery from an injury suffered against Tampa Bay. Now what happens at QB in Dallas?
The most likely answer is simply that backup Cooper Rush, who replaced Prescott for the final six minutes of Sunday's game, will take over as the interim starter. Rush did this briefly in 2021, when he started a single game -- a Week 8 Monday night win over the Vikings -- while Prescott recovered from a calf injury. Originally undrafted out of Central Michigan in 2017, the 28-year-old reserve has spent the better part of five years with the team, only once appearing in more than two games during a season.
Rush was relatively effective in limited action last year, his most prominent with the team, going 30 of 47 for 422 yards, three touchdowns and one interception (105.1 passer rating) in five games, including the start against Minnesota. He was less so Sunday night coming off the bench, going 7 of 13 for 64 yards while trailing by 16, albeit with a makeshift injury-riddled supporting cast.


The only other official option for the Cowboys, for now, is practice squad QB Will Grier, the 2019 Panthers third-rounder who competed for the backup job this summer. The 27-year-old Grier, a former West Virginia standout, is eligible for both a promotion to the active roster or at least three one-week call-ups from the scout team. He spent all of 2021 inactive on Dallas' roster, and also did not play a game for the 2020 Panthers. He does have two starts on his resume, however, from his rookie season, when he struggled in Weeks 16-17, completing just 53% of his passes and throwing zero TDs compared to four picks.
As for external options, it's probable the Cowboys will look to re-sign free agent Ben DiNucci, who was released during final cuts after two years on and off the practice squad. The former undrafted James Madison product appeared in three games in 2020, making an emergency Sunday night start against the rival Eagles, going 21 of 40 for 180 yards in that game, a 23-9 loss.

If Dallas looks even further outside the team, the most notable veteran alternatives include former Panthers starter Cam Newton (unsigned), former Giants backup and spot starter Mike Glennon (unsigned) and former Broncos journeyman Josh Johnson, who could be claimed off Denver's practice squad. Though unlikely, the Cowboys could also explore a trade, such as for current Saints backup Andy Dalton, one of the NFL's most experienced No. 2 QBs. Dalton spent 2020 in Dallas, notably starting nine games in place of an injured Prescott during Mike McCarthy's first year as Cowboys coach.