dbair1967 said:
I think the young guy Clark is pretty close to him already as a player, and might e better. He's certainly faster and has far more range at this point.
Keep reading...

fuck, he should be pushing LVE, not Barr

bbgun said:
fuck, he should be pushing LVE, not Barr
Keep reading...

I'm not sure why LVE is everyone's whipping boy. He has not played bad.

He also turned down more money from the Pats to stay here on a 1yr deal.

He is certainly not the same player he was as a rookie but he has been ok.

This is likely his last year here though, unless he signs another 1yr or short term deal for close to the league vet minimum.

Because he rarely sheds blockers or makes tackles for a loss. I did see him make a crunching tackle yesterday, which happens as frequently as Halley's Comet.

Remember when Jones was hyping up this safety group as the best since the Super Bowl teams.

10 games now, our 3 safeties who play the vast majority of every game have COMBINED for 4 passes defensed and 2 interceptions. Malik Hooker looks like he is stuck in horse shit most plays. Wilson at least shows up as a blitzer and occasionally up to help in the run game. Kearse has not been as good as he was last yr but has had a couple of injuries he's been dealing with.

Maybe something will change down the stretch, but our safeties still suck vs the pass.

For all the shit Roy Williams got, in his 6 yrs as a starter here he had 56 passes defensed (3 straight years with double digits at one point) & 19 interceptions (career high 5 twice). He also had 9 forced fumbles, 6 1/2 career sacks & 20 tackles for loss.

Eagles trampled them too, so ...

bbgun said:
Eagles trampled them too, so ...
Keep reading...

This was the most complete game this team has put together all season.

Too bad they can’t do that in back to back games.

Here's the problem: Philly will still win the East, meaning we're staring at three games in the playoffs (perhaps all on the road). Hell, we might be headed back to Minny.

dbair1967 said:
Romo also said yesterday he thought both coordinators were gone after this season too.

Might be his worst take since he's been in the booth.

We in messico ciddy tonight.

Watcher seein the 49ers do to AZ tonight is exactly what they'll do to us if we meet them in the playoffs. Real football always reasserts itself.

Scot said:
This was the most complete game this team has put together all season.

Too bad they can’t do that in back to back games.
Keep reading...

Certainly no excuse based on the way NYG is playing and all the injuries they have for us to not win fairly comfortably. It won't be 40-3, but if we don't have a solid 10-14 pt win I'm going to be disappointed, unless it's just a bunch of garbage time scoring by NYG to make it close.

bbgun said:
Here's the problem: Philly will still win the East, meaning we're staring at three games in the playoffs (perhaps all on the road). Hell, we might be headed back to Minny.
Keep reading...

Philly is not a lock to win the east.

Doomsday said:
Watcher seein the 49ers do to AZ tonight is exactly what they'll do to us if we meet them in the playoffs. Real football always reasserts itself.
Keep reading...

They got so lucky that the bust 1st rd pick QB they were going gaga over got hurt.

Otherwise they'd already be out of the playoff picture. They were horrible with him.

That said, they are good now and will be a tough out for anyone in the postseason if they are healthy.

Some of this sounds Jason Garrett-esque. 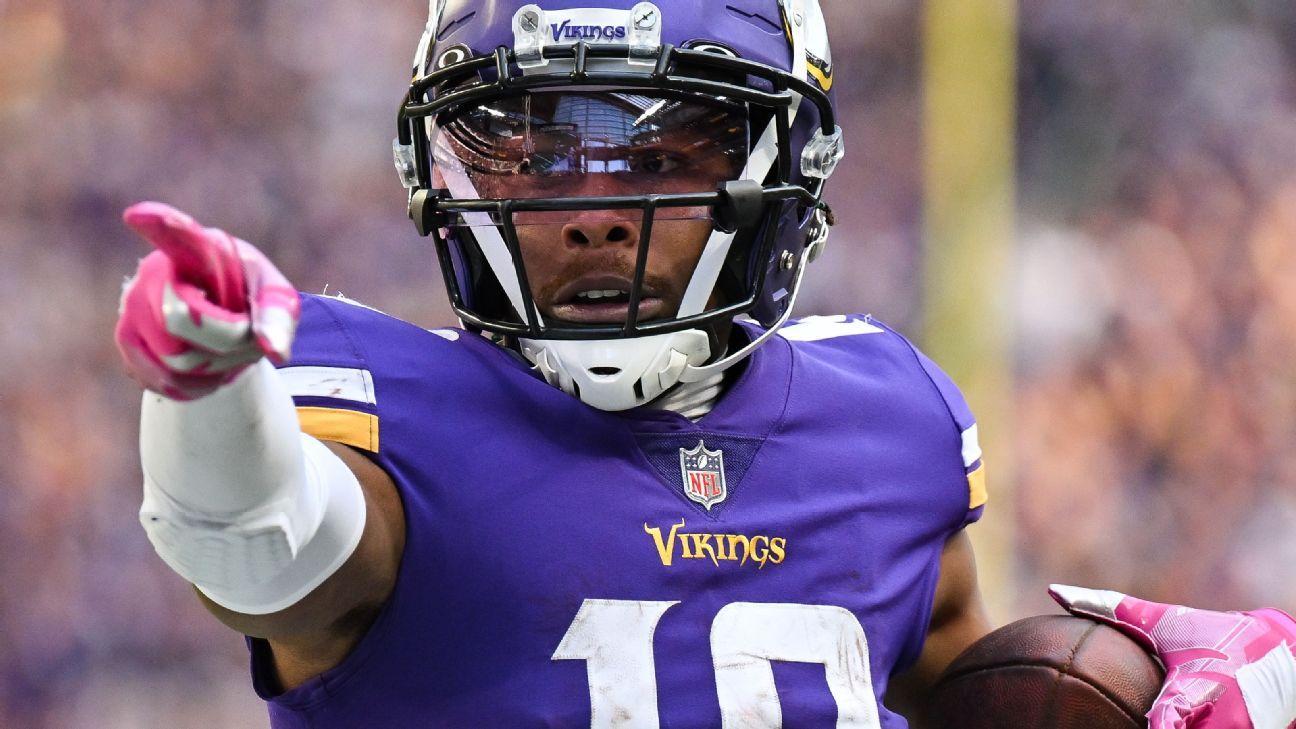 Speaking Monday to reporters, Minnesota wide receiver Justin Jefferson said Sunday's 40-3 loss to the Dallas Cowboys was "embarrassing" and "a disaster all around" for the Vikings, who next play on Thanksgiving night.

Speaking Monday to local reporters, Jefferson called the loss "embarrassing" and "a disaster all around." He then made clear that coach Kevin O'Connell and his staff should have adjusted the passing game to counteract the Cowboys' fierce pass rush. Ultimately, quarterback Kirk Cousins was sacked a career-high seven times, including twice by NFL Defensive Player of the Year candidate Micah Parsons, and was pressured on 63% of his dropbacks.

"It's tough with Kirk getting sacked before you're even getting out of the break," Jefferson said. "It's definitely being in a tough situation, but we've just got to move toward more quick game, getting the ball out quicker, putting the ball in space and letting people work, just things we need to adjust on just throughout the game. If things are not working out the way we planned, then we need to find a way to adjust and go toward something that will work better for us. We just can't continue to keep doing the same thing throughout the game even though it's not working

"I mean, of course I wish we had adjusted faster throughout the game," Jefferson said. "Getting the ball out quicker, not letting Micah Parsons and the rest of that D-line get a chance to get back there to Kirk.

O'Connell said Sunday that he "didn't coach well enough tonight and we got outplayed." He was not available Monday to address Jefferson's specific comments about moving to a quicker passing game.

Sunday's loss came by the second-highest point differential for a team 8-1 or better in the Super Bowl era, an outcome not lost on Jefferson.

If he's anywhere close to 90-100% he's going to be a tremendous addition to our team.

Hopefully he can stay away from the injuries but no question with him and other Smith on same side of OL now, we have an extremely formidable OL all the way across.