Who Here is Not Entirely Sold on Dak Prescott?

Doomsday said:
It's just 45 mil for that 5th year Jerry keeps insisting on. Not for every year. Money isn't and hasn't been the holdup - Jerry's had the checkbook open from the start. Dak wants a 3 or 4 year deal so he can get another big bite of the apple. Doesn't want to be locked in when salary cap and QB contracts explode. He might even refuse the franchise tender and sit out a year. It's a hostile and bad faith negotiation on his part.
Click to expand...

Then get an opt out option for the fifth year. If he's worth what he thinks he is, they'll carry him to the bank on a chariot. If he's not, it'll bite him and he'll be free to try and sucker some other team out of that much money. Better planning and optics than dragging your feet and looking like an ass...

Maybe Troy is feeling a little guilty of some critical comments he's made about Dak...."you either have it or you don't."

Troy called out Dak on his accuracy and anticipation and Bradshaw agreed with that and was critical about Dak missing wide open players.

Dodger12 said:
Maybe Troy is feeling a little guilty of some critical comments he's made about Dak...."you either have it or you don't."

Troy called out Dak on his accuracy and anticipation and Bradshaw agreed with that and was critical about Dak missing wide open players.
Click to expand...

He definitely is not Aikman when it comes to precision, but the idea that he can't hit the broad side of a barn like some of you promote is also not accurate. Dude has a career comp % of 66% and twice in four yrs had nearly 68%

I doubt McCarthy would throw a goal out there for him like the 71% comp % target he set for him this yr if he thought the guy had no chance whatsoever because he was so compromised by lack of accuracy.

Sooo trade to the Giants for two 1st’s?

MrB said:
Sooo trade to the Giants for two 1st’s?


Sent from my iPhone using Tapatalk
Click to expand...

They don't want him now, they got Garrett's main squeeze Cooper Rush there

His first pass to the Giants' LB was extremely accurate as I recall.

dbair1967 said:
They don't want him now, they got Garrett's main squeeze Cooper Rush there
Click to expand...

Andy Dalton would make the perfect starting QB for Garrett

Neither one of them can win in the playoffs

They are each other’s yin and yang

Neither one of them can win in the playoffs

They are each other’s yin and yang
Click to expand...

i think that means that they're both yangs

icup said:
i think that means that they're both yangs
Click to expand...

Garrett coaches by playing with his yang

Stats Show Dak Prescott is Not Elite Against Elite Competition

Stats Show Dak Prescott is Not Elite Against Elite Competition

Dak Prescott is currently embroiled in a protracted contract negotiation with the Dallas Cowboys. He wants to be paid like a top-five quarterback not only next year, but for the duration of his four- or five-year contract extension.

Determining how much a top-5 QB will make in four years isn't easy because no one knows exactly how big the salary cap will be after the NFL negotiates new broadcast deals in 2021 and 2022. The expectation is the salary cap will grow. A lot. Prescott's agent knows that and is trying to bake it into the latter half of his client's new deal.

Right now, the expectation remains that a new deal will be signed eventually. But there is one concerning stat trend for the Cowboys to consider as they project the rest of Prescott's career. In his rookie season in 2016, Prescott was exceptional against teams with an above-.500 record. In the four years since, however, Prescott has been pedestrian at best against the better squads in the league.

In his first year, Prescott threw for 13 touchdowns and 4 interceptions against above-.500 teams and compiled a 6-3 record, including the playoffs. Since then, his touchdown-to-interception ratio is 25-25 and his record as a starter is 6-17. Last year, he had an 8/8 TD/INT ratio and the Cowboys went 1-6 against teams with an above-.500 record.

Of course, you may be asking yourself, well, how do other top-paid QBs fair against quality competition? How do Prescott's stats stack up against those in the pay range he's looking to break into? I'm happy you asked.
Against over-.500 teams both in the regular season and the playoffs (when applicable), Aaron Rodgers had a 12/4 ratio and 5-3 record last year. Russell Wilson had an 11/4 ratio and a 4-4 record. Kirk Cousins had a 15/6 ratio and a 3-5 record. Jared Goff's ratio was 6/6 and his record was 2-4. Tom Brady was 6/5 and 3-4.

While Prescott isn't alone in his struggles against better teams, all of those quarterbacks outside of Goff were better than Prescott against elite competition last year. For the quarterbacks around his same age and stature (yes, Mahomes and Jackson are MVPs, but you get it), Prescott isn't even in the same ballpark.

Against teams with a .500 record or below, Prescott shines. His TD/INT ratio is 64/9 and his record is 29-5. Those are elite stats for sure, but they come against below-average competition. Of course, that's what good quarterbacks do: beat up on bad competition. But putting Prescott in that elite category doesn't fit based on his career performances against better teams thus far.

At the same time, Prescott is only 26 and there aren't many better QBs his age around the world. He certainly has time to develop into an elite quarterback against elite competition and perhaps his new coach (no less a QB whisperer like Mike McCarthy) will serve him well.

The Cowboys will pay him handsomely (likely making him the highest-paid QB ever) based on those realities. But just as Prescott's agent is trying to predict what the salary cap will be in four or five years, the Cowboys have to wonder the same thing. Based on the stats so far, Prescott isn't elite against the elite.

If only Russell Wilson had the luxury of playing the Gnats and Foreskins twice a year each! He might have gotten an even BIGGER contract! 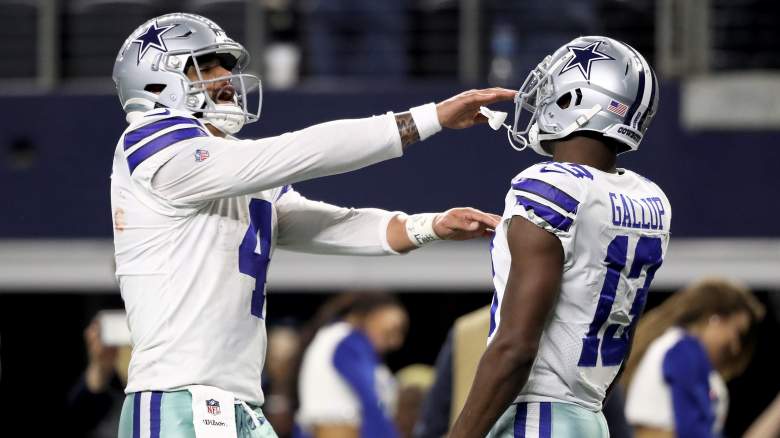 There's something special brewing between Prescott and Michael Gallup.

There's something special brewing between Prescott and Michael Gallup.

Dak and Gallop were ranked #1 in TD’s while the QB was under pressure with 5 TD’s
Click to expand...

that's not surprising for JG's play action double deep system, and it's what Dak does best - extend plays

You must log in or register to reply here.