Cowboys owner Jerry Jones said recently that the team is not giving up on defensive end Randy Gregory despite multiple suspensions and another recent failed drug test.

The same may not be true of linebacker Rolando McClain. McClain will be eligible to return from his 10-game suspension next week, but Jones said Thursday, via Brandon George of the Dallas Morning News, that McClain will not be returning to the roster.

“He’s in shape. Rolando is really somebody who helped us when he was here, but I really don’t want to get into when or if he might be joining us. I’ve communicated with him several times in the offseason and talked to him on the phone. Yes, he does want to play, but there is more detail that I’m not going to get into right now.”

McClain is on the reserve/did not report list because he failed to report to training camp with the team this summer, so the team won’t be forced to make a decision about his status when the suspension comes to an end.

That would be the first time as a Cowboy, ever. No he's not.

Never expected him to

so glad we're not struggling because you know damn well that jerry would bring ro back in a heartbeat if we were. and this bonehead pos does not deserve another chance.

so glad we're not struggling because you know damn well that jerry would bring ro back in a heartbeat if we were. and this bonehead pos does not deserve another chance.
Click to expand...

he still might, cant count anything out with jeri

How the hell does Jerry even know if he's in shape?

Let me guess, because he told Jerry that over the phone.

From his fishing dock. With a purple drank in hand.

i have more faith in the nerve in jaylon's knee firing again than i do in mcclain being able to fit into his old cowboys uniform.


Dallas Cowboys linebacker Rolando McClain is being suspended for another year, on top of the 10-game suspension that was scheduled to end Monday, and there now are doubts he ever will get to play again in the NFL after recently missing yet another drug test, NFL sources told ESPN. McClain is likely to appeal the latest suspension, according to sources. Players suspended for a year do not have a high success rate of returning, and McClain now will be sitting out until at least November 2017 before he's even eligible to apply for reinstatement. McClain was serving a 10-game suspension for testing positive for opiates.

Well at least Jerry can stop with the Rolando McClain return speculation.

Dude's career is over.

smh, what a jack wagon

Are you fucking kidding me?

Guess that was the thing Stephen Jones was talking about not wanting to get in to.

What a piece of shit

yes, you're reading this right 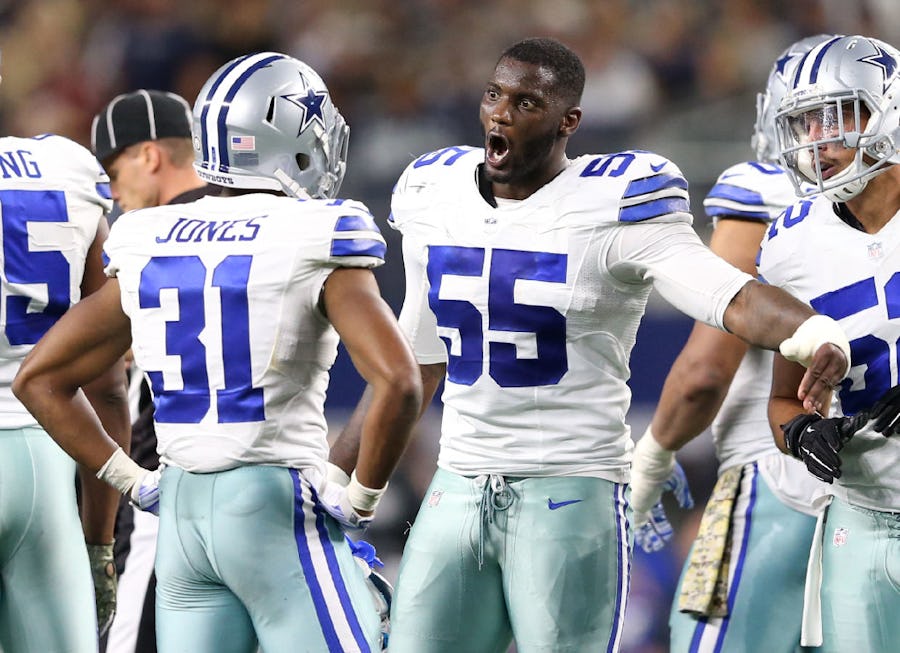 ARLINGTON - Suspended Dallas Cowboys linebacker Rolando McClain recently missed a drug test that could keep him out of the NFL for another year, a source said.

McClain has been serving a 10-game suspension to start the season for violating the league's substance abuse policy because he tested positive for opiates, sources have said. McClain would have been eligible to return to the Cowboys on Monday.

Cowboys owner Jerry Jones had said last week, however, that McClain wouldn't be back with the team Monday but didn't specify why.

"I can't talk about anything to do [with his drug tests] because I'm not allowed to know anything about his testing," Jones said.

Jones did make it clear that he wants McClain to return to the Cowboys.

"We certainly, when he's eligible, we won't release him and when he's eligible he'll be a part of this team," Jones said. "He had gotten in good shape. We'll just deal with what I'll find out with his status from the league."

Jones was asked if he expects McClain to be eligible to play this season.

"I just don't know," Jones said. "Our plans were for him to be eligible and thought he could be a real addition to our defense, but under the circumstances, I don't want to comment because of the detail."

McClain is in Stage 3 of the NFL's drug policy. A missed test counts the same as a failed test. The league could now suspend McClain for an additional year, which would keep him out of the league until November 2017 and - for a player who has already retired twice - put his NFL future in serious jeopardy.

McClain is expected to appeal the recent missed test.

McClain is under contract with the Cowboys until the end of the season. He's been on the reserve/did not report list after he never reported to training camp. The question for the Cowboys is whether his one-year deal could be applied to the 2017 season because he hasn't appeared in a game for Dallas this season.

Unbelievable.
You must log in or register to reply here.