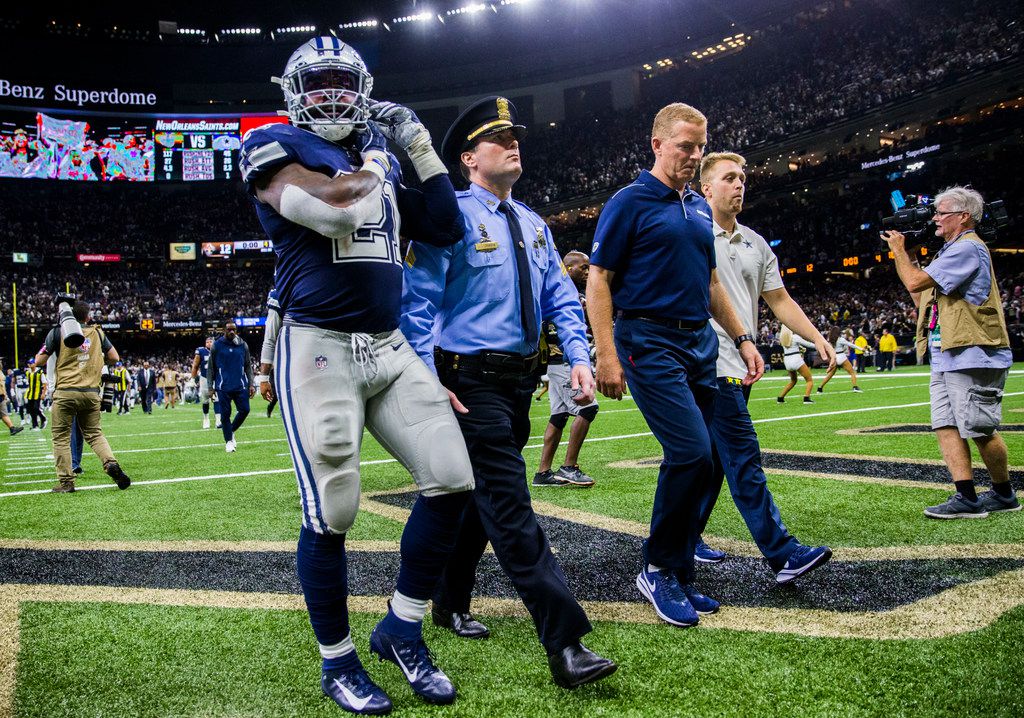 
There should be a phone app to keep a running total to track how many plans, and lives, New Orleans and its Bourbon Street, Canal Street and the French Quarter have ruined.

Maybe the streets and clubs of New Orleans can explain what happened to the NFL’s highest paid running back on Sunday night.

During running back Ezekiel Elliott’s holdout in the preseason, Jerry Jones playfully asked, “Zeke Who?”

On Sunday night, the Saints merely answered “Who dat?”

This scenario was always possible, and the Cowboys’ path to their first 4-0 start since Year 1 of the Wade Phillips regime in 2007 is gone.

(Before another word one about the Cowboys’ game and the “best running back in the NFL” ... the officials and referees have been neutered and turned into terrified shells of themselves. They have an impossible job where a C grade may qualify for excellence. They were also awful Sunday night, when flags rained on the Superdome field like beads on Bourbon Street. At least they were bad both ways.)

For the first time this season the Dallas Cowboys ran into a good team. The good team punched the Cowboys in the face, and shoved a schooner of Humility right down their throat.

And ponder how this game would have looked had the Saints had quarterback Drew Brees rather than Teddy Bridgewater playing quarterback?

With Brees in there, he is not sacked with less than two minutes remaining in the game on a third down that led to a favorable punt to give the Cowboys a last-minute shot to win.

The Cowboys may end up being the best team in the NFC in January, but right now there are other teams ahead of them. Beating the Giants, Redskins and Dolphins is good for a warm cup of “Who Cares?”

The most troubling element to the Cowboys’ loss in New Orleans isn’t the defeat itself. It’s the way they lost.

The Saints used virtually the exact same plan to counter the Cowboys as the L.A. Rams did in the NFC Divisional playoffs back in January.

The Rams manhandled the Cowboys, and treated Zeke like a tackling dummy. Dak Prescott and the passing game could not keep up with the Rams.

On Sunday night, the Saints did the same thing. Other than a short touchdown run in the third quarter, Zeke was awful. So was the run blocking.

Sorry, but this should not happen to the best running back and the best offensive line in the NFL.

Zeke held out of training camp and exiled himself in the living hell that is known as Cabo because he felt like he should be the highest paid running back in the NFL. Of course Jerry Jones waited until the last possible second to sign him to a deal that did just that, and Sunday night happens.

Against the Saints, Zeke ran it 18 times for 35 yards. According to my advanced analytics chart, that’s horrible, not to mention a waste of money.

He also lost one first-half fumble, although replays show that is was a borderline call.

(If you are wondering how Zeke did in that playoff loss to the Rams, he ran it 20 times for 47 yards.)

And what about the new Einstein of football, offensive coordinator Kellen Moore?

In the first half, Moore paid homage to his former boss, Scott Linehan. He ran Zeke into a pile of bodies for a total of three first half points.

It didn’t help that on one long third down conversion in the second quarter, tight end Jason Witten fumbled. As in he fumbled. The football.

Jason Witten fumbling occurs with the frequency as an Olympic games. That was the ninth fumble of his career.

Out of the half, Moore decided to see if his quarterback could pass it down the field and ... for one magical drive it worked.

Dak was brilliant in the third quarter, which included a perfect 35-yard pass to tight end Blake Jarwin that set up Zeke’s touchdown run.

In the third quarter this season, Dak is 28-for-28 with 457 yards and three touchdowns.

But the fourth quarter came, and the Saints didn’t let the Cowboys do much of anything.

Speaking of football games, let’s not let the Cowboys defense walk out of the Superdome without a word or three of admonishment.

They forced a turnover and held the Saints to just 12 points. They also couldn’t get off the field enough in the fourth quarter when Saints running back Alvin Kamara looked like the best running back in the NFL.

On Sunday night, the Cowboys just had the highest paid running back in the NFL. A lot of good that did them.

As has happened to millions of men before him, New Orleans got the better of Zeke.

The coach did not put his players in the best position to succeed.

sucked losing, but give me that kind of game any day. I hate the 38-35 games that are so prevalent today.

Only slightly more interesting and relevant is comparing strength of schedule between today and that 2016 season... last week had us coming in 3-0 with only 2 wins to the credit of the 3 defeated teams. As I recall in 2016 we opened with a loss to the Giants, then beat Warshton, The Bores, then the Fairy-niners to get to 3-1. The teams combined had 4 wins by the end of week 4. This year the teams we have played have a combined 5 wins.

First time we ran into a team that had some wins? Nawlins. The first half-decent team we played, thumped us.

Doomsday said:
The coach did not put his players in the best position to succeed.
Click to expand...

That he did not. Everyone's talking about Dak being exposed, Zeke being exposed....there are three things I took from this game, and they had nothing to do with either of them, or many of the players on the field for that matter.

1. Garrett got outcoached. Not a shock, and not nearly the first or last time. This was a game where what was happening on the sidelines was every bit as important as what was on the field. Exactly the type of game we didn't want to be in, because Sean Payton will bury Garrett every time.

2. Michael Gallup is missed. New Orleans could focus on letting Lattimore shut down Cooper, and aside from one semi deep completion to Blake Jarwin there wasn't even a threat of anything downfield.

3. The Saints defense isn't getting enough credit. It's a good unit, even if the stats don't always support the fact.

Sometimes a loss is just a loss. Especially when it's only Week 4. The most important thing that matters coming out of this game is seeing how they respond when the Packers come in next Sunday. Unless anyone thought Dallas was going undefeated?

Maveric said:
. Michael Gallup is missed. New Orleans could focus on letting Lattimore shut down Cooper, and aside from one semi deep completion to Blake Jarwin there wasn't even a threat of anything downfield.
Click to expand...

There was no deep threat because we didn't try, it wasn't part of the game plan coming in. The plan was "no risk and hope." Not "attack and destroy."

The New Orleans Saints went deep into the vault to prepare for the Dallas Cowboys in Week 4.
According to NFL Network's Steve Wyche, the team looked at tape from offensive coordinator Kellen Moore when he played quarterback at Boise State.
"They saw some of the hand gestures and some of the things he liked to do at Boise that he's incorporated into the Cowboys offense, and they were able to pick up some tendencies from that," Wyche reported.
The strategy seemed to work, as Dallas was held to 10 points and 257 yards of offense. The team averaged 30.3 points and 501.8 yards in the four other games this season.
You must log in or register to reply here.
Share:
Share
Top Bottom
We've logged