Remember when the offensive line was the strength of this team?

Wtf?
Lamb out with a head injury?

Seriously, would it kill you to throw the flag?!

Apparently it happened before halftime, they showed him walking in with help...

Maveric said:
Remember when the offensive line was the strength of this team?
Keep reading...

That's why I wasn't too excited about the Armstrong sack. Despite a down season, Butker can still nail kicks like that...

The Chiefs had 15 sacks coming into today’s game. They have 5 1/2 sacks today with Chris Jones on 3 of them. It’s almost like we resigned the turnstile Chaz Green. 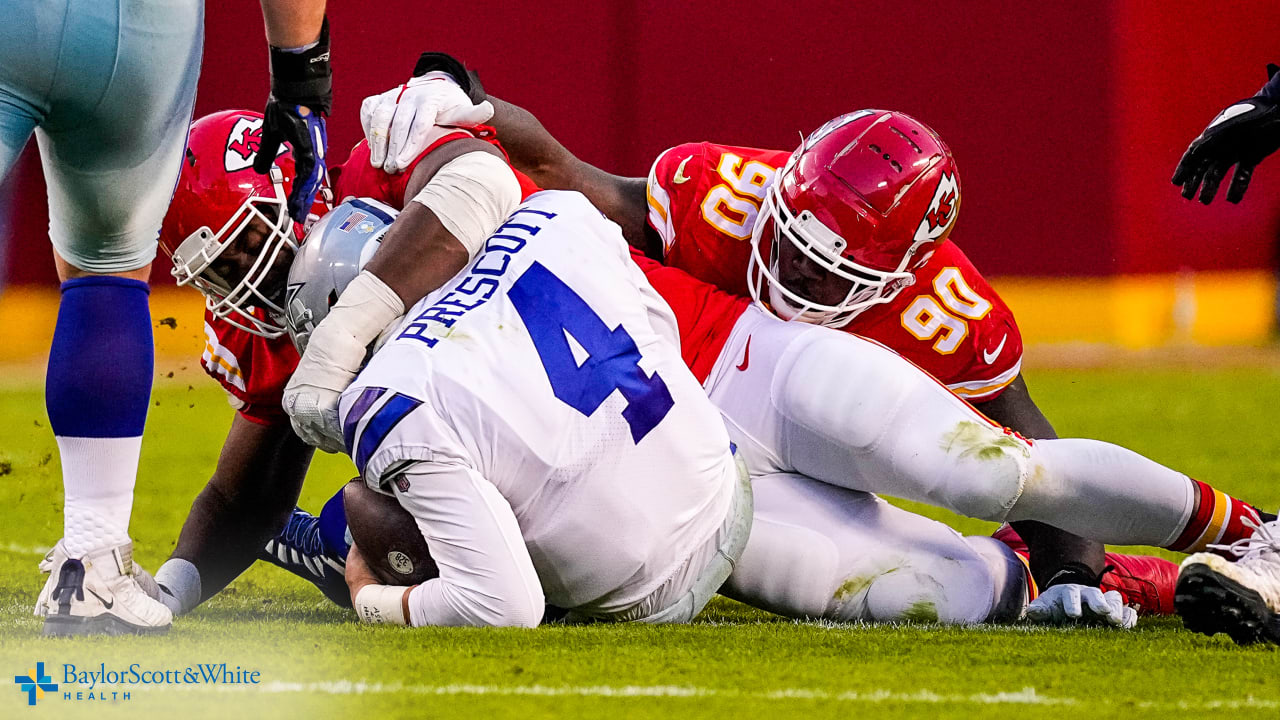 The Dallas defense limited Patrick Mahomes, but Dak Prescott and the Cowboys offense struggled throughout the day, failing to reach the end zone in a 19-9 loss at Kansas City.

Scot said:
The Chiefs had 15 sacks coming into today’s game. They have 5 1/2 sacks today with Chris Jones on 3 of them. It’s almost like we resigned the turnstile Chaz Green.
Keep reading...

Yeah the OL, and I mean ALL FIVE of them were absolutely bitch slapped today. We probably won't get coaches grades info for this, but I'd be willing to bet this might have been lowest graded game of Z Martin's career. McGovern was horrendous at LG and both tackles were owned for most of the game. Collins looks like a shell of his former self out there to me.

I am trying to find the tweet I saw postgame, but basically it said since pressure/QB hit numbers started to be tallied officially that the OL today allowed a combined pressure/hits/sacks of 27, which I think said was the worst number since they began tracking.

The Chiefs defense is mediocre at best, and we made them look like the 85 Bears today.

A whole lot of ugly out there today:

1) Prescott got no help, the OL was putrid and we dropped 4-6 catchable, maybe 7. A few of those killed drives. That said, he grossly overthrew Gallup for a potential huge play to start the game and had too many bad throws or decisions as the game wore on. The stupid interception before halftime also cost us Lamb for the remainder of this game and almost assuredly Thursday as well. 40 million a yr QB should not have two games in three weeks like this.

2) As mentioned above, OL was beyond putrid with perhaps one of the worst performances in a long, long time. All 5 of them got their asses handed to them today and its pretty obvious now why they never really wanted to bench Connor Williams, despite the penalties. McGovern did not look like a legit starter. Lael Collins was horrendous and Steele was not good either. Pass protection and run blocking were both equally horrendous.

3) Horrible day by the receivers, who dropped too many easy ones.

4) Not going to blame the officials for the loss, but seriously WTF? They must have missed at least 4 or 5 OBVIOUS PI/illegal contact penalties on the Chiefs today. On the holding call Steele got, he probably did hold but not until AFTER Clarke had jacked his facemask so hard his head snapped back. And reviewing something that was not reviewable? Huh? What about the painfully obvious intentional grounding? Getting so sick of this shit almost weekly.

5) A couple of us pointed out a few weeks ago that it was really too bad Jabril Cox blew out his knee. I think he'd definitely be getting a significant portion of the reps Neal and LVE are getting now, and the results would probably be better. Neal was horrible again today.

Holding the Chiefs to 19 pts pts, getting 3 sacks and 2 turnovers should be a defensive performance good enough to win and for the 2nd time in 3 weeks the offense totally shit the bed. The injury situation with this team is pretty bleak right now too. They really need to somehow win these next two games but if they cant perform any better than this then losing both is a real possibility, even though the Raiders and Saints both suck right now.

Found some of what I saw earlier in another thread at CZ.

27 pressures allowed today by those pussy OL's is the most in the NFL this season (next worst is 21) and the 27 allowed is the 2nd most allowed in the last 10 seasons.

Micah Parsons was credited with 12 (TWELVE) pressures today by himself. At one point he had 3 sacks for the game but they took one away afterward. This kid is an amazing talent. A LB by trade who sat out his final college season, playing DE in some games and situations because of injuries. And he gets TWELVE pressures in a single game.