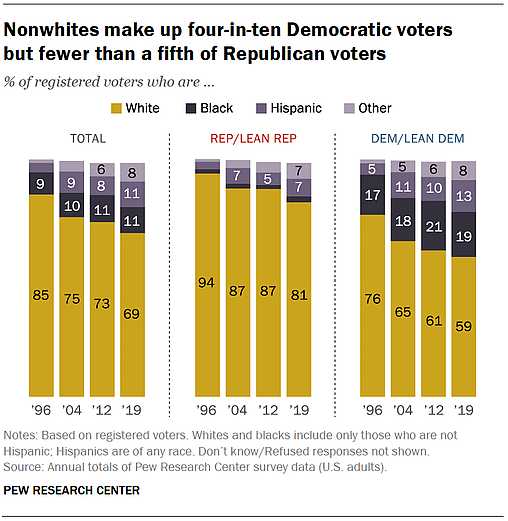 I think times are changing myself.

The Dems sold themselves as the party of the working class and minorities and folks bought it hook, line and sinker. My family was also life long Dems and I was probably the first one in my family to break ranks in my early 20's because I just couldn't vote for Michael Dukakis. Unions and minorities are leaving the Democratic party after years of failure and selling off our jobs to China and Mexico with bad trade deals.

Dems also took these votes for granted. I have no issue crossing party affiliation, as I vote for policies, not people.

Trump may lose this election but more and more minorities are breaking ranks.

Big Al comin' at ya!

If true, (it's based on polling not actual voter registration records) then it's really not at all surprising.

Ever since LBJ proclaimed "we'll have the niggers voting democrat for the next 100 years" you have had decades of pandering for the black vote. You have one party selling "free stuff" and the other one selling "work to earn stuff" and so on. You have nearly 20 years now of intentional racial and cultural flame fanning by the dems, you have constant race-baiting and demagoguery from them on skin color and economic disparity as the result and how they will make evil white man pay, and on and on in a steady drumbeat. Ever since the democrats embraced cloward-piven and employed Saul Alinksy's strategies you've had this work going on annually.

Real surprise if we're to believe this polling is that it isn't even worse than it's made to look.

One thing that sticks out to me from the chart - either whites across the board are affiliating a lot less, or more and more are not participating in polls. Otherwise no other way to explain the decline of whites on all four charts. Unless somebody wants to say the white population overall is declining that much?