Prisco's 2022 NFL Draft grades for all 32 teams: Ravens earn A+, Chiefs and Jets get A's, Bears get worst mark

Best Pick: Second-round pass rusher Sam Williams is an impressive edge rusher. Were it not for character concerns, he would have been a higher pick. He fits a major need.

Worst Pick: Fourth-round tight end Jake Ferguson probably went a little high for his skill set. They do have a need there, so it makes sense to take a chance, but there were better options.

The Skinny: I like what the Cowboys did. I was higher on first-round pick Tyler Smith, the offensive lineman from Tulsa, than most. He will be a good player, likely at guard to start. I also liked Williams and third-round receiver Jalen Tolbert. 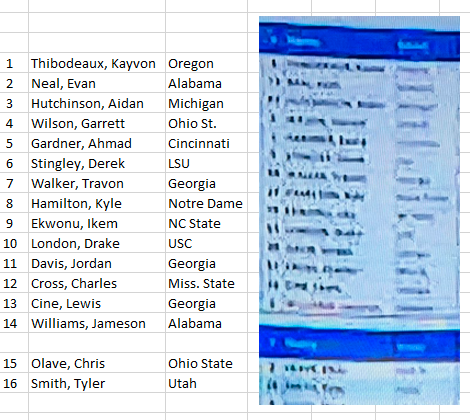 this team is in the very best of hands

Not really confident they "decoded" it all that well, it's completely illegible.

That said, I almost wonder if Jones just threw that shit together 5 mins before he walked out there so he could "prove" they had Tyler Smith 16th on their board, because he knew most wouldn't believe him.

The NFL Network radio guys on Moving the Chains (Jim Miller and Pat Kirwin) really like our draft as fyi.

dbair1967 said:
so he could "prove" they had Tyler Smith 16th on their board, because he knew most wouldn't believe him
Keep reading...

The Dallas Cowboys were not shy about their desire to land a top receiver in the draft, but in the end, the team opted not to trade up instead selecting Tulsa offensive lineman Tyler Smith at No. 24. Locked on Cowboys’ Marcus Mosher reported the team attempted to move up on draft night to land USC wideout Drake London, Ohio State receiver Chris Olave or Mississippi State’s offensive lineman Charles Cross.

“Again, some of this is based off what we’re hearing and behind-the-scenes stuff, but the Cowboys were looking to trade up for Drake London or Charles Cross,” Mosher explained on the April 28 edition of “Locked On Cowboys.”Drake London goes eight, it’s far too high to trade up. Charles Cross goes nine to Seattle, I believe, too far to trade up. At that point, at least it seemed like the Cowboys were going to be patient and wait.
Read More: https://heavy.com/sports/dallas-cowboys/trade-rumors-nfl-draft/

Speaking of Kirwin/Miller, they noted yesterday that the ratings for the draft have collapsed the last 3 years, this year's 1st rd represented a 50% drop from 3yrs ago. It's even worse for day two and day three.

They seemed to intimate what some of us have thought, that some of Goodell's dumbshit "entertainment" is crushing the interest of the people the draft is really appealing to- the real NFL fans.

Fuck you Goodell. Honestly I may never watch again after this years all-time stupidity and instead just watch picks come across the internet. 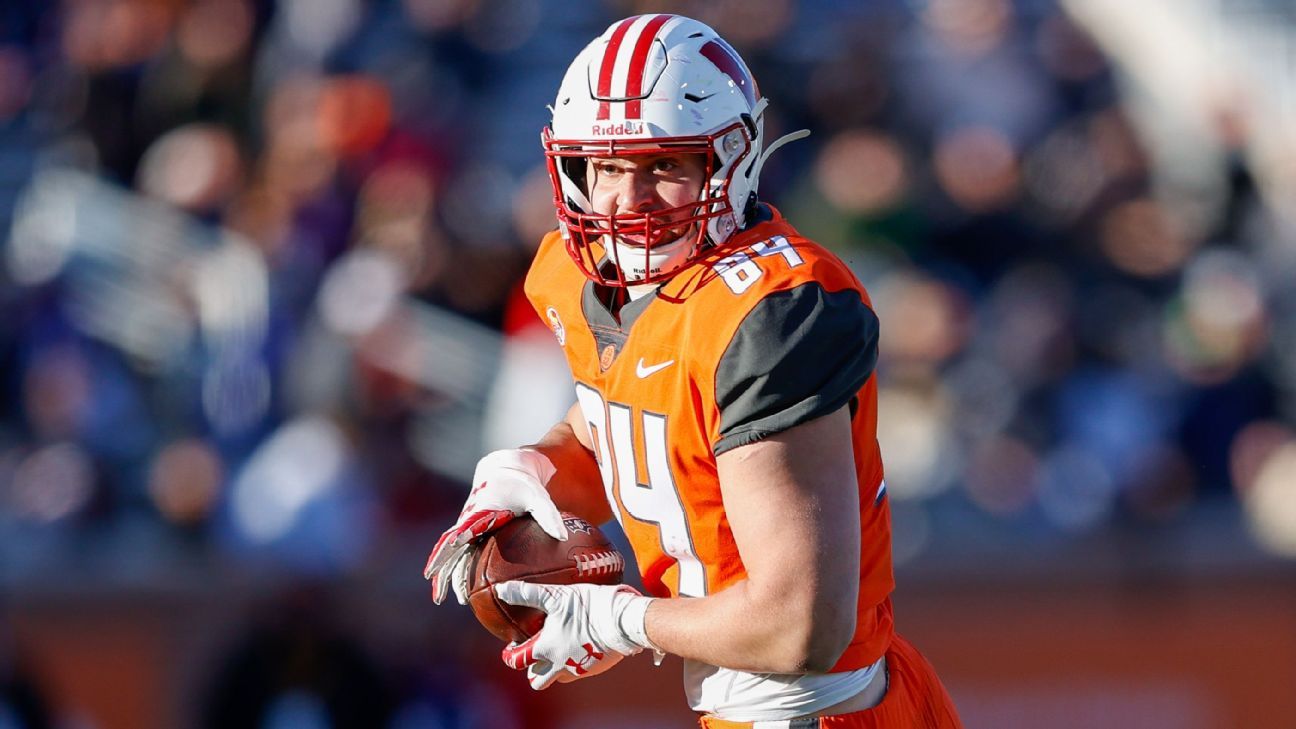 The Cowboys loaded up on prospects from the Senior Bowl, drafting six players who used a chance to prove themselves against some of the country's best.

FRISCO, Texas -- Back at the Senior Bowl in February, they were teammates for a week. Jake Ferguson and Matt Waletzko on the National Team. Sam Williams, Jalen Tolbert, Damone Clark and John Ridgeway on the American Team.

Last weekend during the NFL draft, they became teammates again on the Dallas Cowboys.

“It’s a spotlight when you’re going against the top prospects of the draft,” Ridgeway, a defensive tackle from Arkansas, said of the Senior Bowl. “It’s a kill-or-be-killed mentality when you’re there. You got to go up there and put your best foot forward. That’s what all the Dallas Cowboys' prospects did.”

Not unexpectedly, Senior Bowl executive director Jim Nagy loves what the Cowboys did.

Cowboys vice president of player personnel Will McClay said the Senior Bowl helped them get an on-field feel for players.

“You get to have your hands on them and you get to see them compete against the better guys," McClay said. "So that does add to it, but it’s not the end all, be all. It’s just a piece of the puzzle. We do like to see them in that environment and see if it matches with the information that we get. Then you go to the combine and add all of those other things to it.”

For Tolbert and Waletzko, it was a chance to matchup against better talent after playing at smaller schools. At South Alabama, Tolbert was an All-Sun Belt Conference wide receiver after catching 82 passes for 1,474 yards and eight
touchdowns. Waletzko, an offensive tackle, played at North Dakota, which last produced an NFL draft pick in 2006.

“It definitely gave me a chip on my shoulder to prove myself to the teams and just show everyone in the league that I can play with the best of the best,” Waletzko said.

Tolbert caught two passes for 24 yards in the Senior Bowl.

“He’s just a really good all-around receiver,” said Nagy, who's known Tolbert since high school. “He’s got a pro body already. The physical part of the game, he’s ready for that.”

What may have mattered more is how Tolbert did in games against bigger schools. Against Tennessee, he caught seven passes for 143 yards and a touchdowns.

“The Tennessee game was a special one,” Tolbert said. “I had marked that calendar date for a while, and I was actually excited to go out there and play against those SEC opponents and show them that my level of competition does not matter.”

McClay said the Cowboys came away intrigued after that game and studied Tolbert more after a solid Senior Bowl. Tolbert had a private workout with the Cowboys and was among the national visitors before the draft.

“When you visit with him and you find out his intelligence and his awareness to coverage, to all the things he knows, he shows that he’s further ahead than maybe someone from a smaller conference,” McClay said.

Ferguson, the tight end who was was the Cowboys’ fourth-round pick, caught three passes for a game-high 62 yards and a touchdown in the Senior Bowl.

“What stands out the most with Jake, on top of the versatility, is just the catching skills,” Nagy said. “This guy has some of the best set of hands in this year’s draft whether that be a tight end or a wide receiver.”

Ferguson’s initial introduction to the Cowboys was a 15-minute meeting in Mobile, which was followed a few weeks later with a formal interview at the combine in Indianapolis where he met coach Mike McCarthy and tight ends coach Lunda Wells.

“At Wisconsin, we go by these three words -- smart, tough, dependable -- and that was my pitch to Coach McCarthy, telling him, ‘Hey, I’m smart. I’m going to be able to pick up the plays. I’m tough, throw me into any scenario and I’ll be ready, and I'm dependable,’” Ferguson said. “[McCarthy] took those words to heart, and he said it on that [draft] call, and he’s going to hold me to it.”

Williams was the Cowboys’ highest pick, No. 56 overall in the second round, from the Senior Bowl. If not for a neck injury that was diagnosed at the combine, Clark could have been a second- or third-round pick after making 135 stops in his last year at LSU, to go along with 5.5 sacks and 15.5 tackles for loss.

“I saw him at his pro day and his outlook on this thing was incredible,” Nagy said. “I mean he’s just got such a great spirit and his mind is in the right place. I was fearful he might fall out of the draft, but I’m happy the Cowboys took a shot.”

Clark was named the best linebacker at the Senior Bowl after the week of practices and the game.

“When you take care of business, you reap the benefits,” Clark said. “You handle business and everything else takes care of itself.”

The Cowboys won’t see Clark on the field until November at the earliest because of spinal fusion surgery, but they don’t want to call 2022 a redshirt season for him. If they want to see what he can do, they can look at the Senior Bowl.
“I felt really good,” Clark said. “You turn the tape on, you’ll see it.”

and i think jim nagy was just hired by the eagles

I think Sam Williams is a STUD and will be starting by the mid part of the year. He heavy hands, quick, strong and violent. Having Parson and Williams at both end is going to be scary......

The more stuff I see of Ferguson the more I like him.

I also went back and watched his clips from the Senior Bowl, he had a really solid game and ended up the leading receiver for the game as well.
C

Ferguson is a solid player but he needs to add more weight. He is very good on contested passes, not bothered with getting hit while catching the ball and he is faster than his combine's 40 time. He is a Schultz's clone.
You must log in or register to reply here.
Top Bottom
We've logged