bbgun said:
Can we please keep him within five yards of the LOS? He was playing deep middle yesterday on more than one occasion. We have safeties for that.
Keep reading...

And he did it extremely well. He got into some good spots to help disrupt some throws/lanes.

He is absolutely a complete player and can do it all, but yeah I agree. He is so dominant at and behind the LOS that you need to take advantage of that as much as you can.

They suck worse than Hochuli's crew?

Looks like they are going to make the right decision and replace McGovern with Williams at LG.

McGovern had a chance and just has not performed well at all. The lines overall level of play dropped another notch when he was inserted into the starting lineup.

Tyler Biadasz might survive the season as the starting C but his shotgun snaps are just dreadful, he might be the worst in the league at it and it's definitely disrupting the timing of multiple plays per game. Biadasz might end up playing G himself next year. 7th rd pick Matt Farniok actually looked pretty good when they moved him to C during preseason, I think he might be injured or something now but he might be an option next year. If not him then they almost assuredly will sign someone or draft someone.

dbair1967 said:
While unlikely, there is still a road to us getting HFA for the playoffs.

It would almost assuredly require we win out to finish 13-4. Doing so would also give us a head to head tie breaker vs Arizona and our final conference record would be 11-1.

From there, we'd either need to finish in a head to head tie with Arizona OR a 3/4 way tie with Tampa and Green Bay. I think if we do finish in a 3/4 way tie we would get HFA based on better conference record (Cards, Packers and Bucs already have 2 or 3 conference losses each). 2014 was somewhat similar as us, Seahawks and Packers all finished 12-4. We had a head to head tie breaker vs Seattle but we did not play GB, so the tie breaker went to conference record. Seahawks got the #1 seed with a 10-2 NFC record, followed by GB (9-3) and then us (8-4)

We'd need AZ to lose twice (once being us) and GB/TB to both lose once. Barring injuries or just not showing up, Tampa losing a game is probably unlikely. Packers caught a huge break with Lamar Jackson being carted off yesterday and he may not play for the Ravens next week. Cards have 3 tough games remaining with Rams, Colts and us. I included the Rams just because technically they are still alive for the NFC West title but their schedule is pretty tough and Cards already thumped them once.
Keep reading...

AZ losing last night changed some of the seedings.

Green Bay is now the #1 seed even though they are tied with TB and AZ, but they win that based on better conf record. We are now 1 game behind GB, Tampa and AZ but we play AZ. AZ dropped the 3rd seed.

Apparently Rodgers re-aggravated the toe/foot thing and his status might be a little iffy. I did read that the Ravens intend to play Lamar Jackson vs GB this Sunday though.

Tampa has by far the easiest schedule of the 5 teams in contention for the #1 seed but as above, if we win out we have a reasonable chance at HFA because we'd end the season with only 1 NFC loss. We would not win a head to head tie breaker with TB but the better conf record would come into play if there is a 3 or 4 way tie.

Looks like we get Mike Glennon this week. Hopefully our pass rush is all over him, he's a freaking statue but we didnt sack him (or Jones) one time in our blowout win over them in Dallas.

News: - PFT: Report: Daniel Jones is not expected to be cleared to play this week 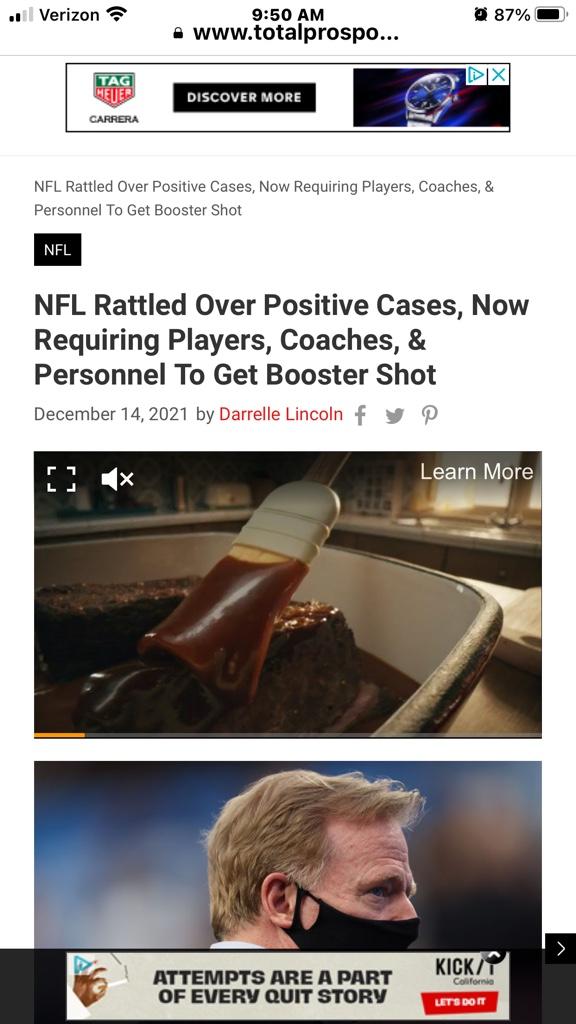 Yeah because those original vaccinations worked so well.

we aren't gonna win out, we might beat the rest of the nfc least but we aren't beating the cards.

lons said:
we aren't gonna win out, we might beat the rest of the nfc least but we aren't beating the cards.
Keep reading...

The Cards might be resting all their starters by then

Scot said:
The Cards might be resting all their starters by then
Keep reading...

It looked like they were "resting" last night as a covid riddled Rams team just beat 'em up.

Have you seen our offense the past few weeks? It's like we went back to 2002

lons said:
we aren't gonna win out, we might beat the rest of the nfc least but we aren't beating the cards.
Keep reading...

I'm not sure what some of you people see in the Cards. They have a decent team, but by far their best win of the year was over Tennessee in week one. Since then their only real notable win was vs the Rams in week 4, and as Dooms mentioned they got pretty much run off the field by Rams team missing several guys (at home). They also got blown out by a mediocre Panthers team missing a bunch of players at home a few weeks ago.

Scot said:
The Cards might be resting all their starters by then
Keep reading...

They are only 1 game up on the Rams now, so its highly unlikely.