2021 NFL draft grades: Our experts grade the Dallas Cowboys’ selection of LB Micah Parsons at No. 12 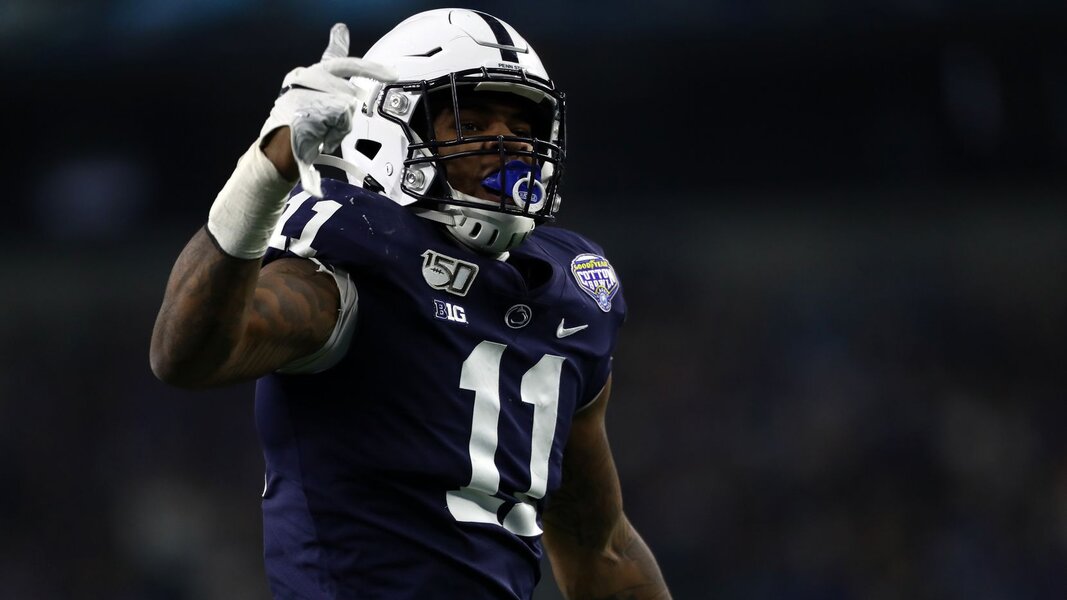 The Cowboys missed out on both top corners, a scenario that wasn’t expected, despite what the Cowboys might say, yet, they found the best inside linebacker in the draft class.

Micah Parsons plays with a feistiness the team likes and while there was a major off-the-field issue at Penn State, it’s not something to worry about long-term. Parsons brings competition to the linebacker group and versatility where he can become a rush end.

Will the first round pick of Micah Parsons resonate with fans the way CeeDee Lamb did last year? No. But the Cowboys added speed and aggressiveness to a defense that lacks those qualities and added an extra third-round pick in the process.

The Cowboys made the best of an “F” situation when the top cornerbacks went ahead of them, trading back and adding a third-round pick before adding defensive help. But I am worried about this locker room’s ability to support a rookie Parsons. To whom will he gravitate?

Getting an extra third highlighted the Cowboys’ first round. Parsons shows flash, and he’ll eventually replace Jaylon or LVE, but character questions loom. Rather have Slater, the OT.

With Surtain and Horn off the board, the Cowboys are able to get the most talented defender on available while netting an extra third-round pick.

Parsons is supremely athletic and talented but is inexperienced at the LB position and shows it. My biggest gripe with the pick is the positional value, as I think Dallas was already over invested in the LB position coming into the draft

Micah Parsons could prove himself worthy of a higher grade with his play. But the disappointment comes from missing out on either of two cornerbacks who were of more immediate need in today’s trigger-happy NFL.

I feel like a few of these "experts". LB was a need but not a dire need. And LB to me has become a position like RB. The game has changed and DBs are way more important along with pass rush.

Disappointed they did not get the CB, but that does not mean they had to settle for Parsons at 12. Why not trade down further maybe get a 2nd round pick? Look what the Giants got from Chicago. A 2022 1sr round pick from Chicago will probably be in the top 15. Very smart dealing by the Giants. And they still got a WR they wanted.

The Cowboys could have traded down to 20 and picked up Farley, Newsome of Stokes.

Creeper said:
I feel like a few of these "experts". LB was a need but not a dire need. And LB to me has become a position like RB. The game has changed and DBs are way more important along with pass rush.
Keep reading...

These grades are stupid in general. If Parsons wants to be great and is put in a position to succeed he will. After that it is the usual crap shoot with lots of question marks on every prospect. I wonder what some of these geniuses grades were for the lasted epic disaster, the 2017 draft.

From a big picture stand point according what I read, a poll of league execs and scouts said it was a shallow draft and the meat was between 20 through 60. Many of them came to this conclusion based on the the fact that the amount of prospects they had on their UDFA boards were down 30% from a normal year. In other words bottom of the draft had less talent than usual pushing guys into UDFA territory. So what do big and little Enos do? Well they load up on picks from rounds three through seven, stay put, and refuse to move up to where concensus said the difference making talent was. Quantity over quality.

theoneandonly said:
So what do big and little Enos do? Well they load up on picks from rounds three through seven, stay put, and refuse to move up to where concensus said the difference making talent was. Quantity over quality.
Keep reading...

Likely because they consider this a "depth draft" because they think they already have a SB team.
You must log in or register to reply here.
Top Bottom
We've logged