That is so cool.

Dodger12 said:
The fact that Jimmy gets in the HoF without being in the RoH 25 years after he left Dallas and built a dynasty is an absolute disgrace and embarrassment. Fuck you Jerry and your sorry ass spawn to boot.
Keep reading...

I find it more of an embarrassment that Jones gets into the HOF before Jimmy.

I find it more of an embarrassment that Jones gets into the HOF before Jimmy.
Keep reading...

bbgun said:
that's a charitable interpretation. players hate four pre-season games, let alone five. they have to get on a plane for Cali then another one for Ohio two weeks later? pass. you can get more done in practice than you can in an exhibition game where the starters are pulled after one series.
Keep reading...

Not really, because most of the starters play a few plays in a game if that. Preseasons is more to shake off the rust for the vets, and evaluate the ones trying to make a roster.

No dynasty is possible under current ownership. I could argue that they wouldn't have won since 77 if Jimmy and Jerry hadn't been college roommates. And that only happened because their last names were in alphabetical order.

Jimmy gets antsy. He never stays in one city for very long, so even if he got along with Jerry, he wouldn't have had Belichick's longevity.

We'd wax the floor with any of those Pats teams, or just about any of these modern free agency teams.

Not that this post really belongs in this thread, but I didn’t really want to start a new thread to put this info out there. But Jimmy is a huge part of the Cowboys history and that is what my post is about.

On the Hangin with the Boys podcast on January 13th titled Trying Something New they had on the Cowboys Archivist and talked about how they will have him on once a month to bring in something of interest to discuss.

I found him extremely interesting. If you are a fan of Cowboys history you NEED to listen to the podcast. He talked about the original recorded phone calls with Tex and the lawyers when they were discussing the new expansion team which became the Cowboys, they also talked about having every single one of Landry’s playbooks from 1960 on, along with his play cards he carried every game on the sideline, along with his actual desk and furniture that you see in the clip of him as he’s packing up his stuff when Jerry fired him. They have the film of the 1st time the Cowboys ever took the field as a team vs the 49ers in preseason of 1960. He said Jerry has actually saved pretty much everything from the time he got here.

Each month the archivist will be on and bring something important from a Cowboy history to discuss or play on the podcast.

drew please dont raise your voice you are scaring the children 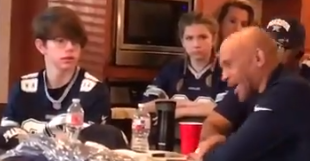 I'd put Drew in ahead of Harris, who got exposed when covering da brothas.

The sad part is that because this is the Centennial year it sounds like this would be his best chance to make it in.

Drew said that they broke his heart

'They Broke My Heart': Cowboys Legend Drew Pearson Upset Over Not Making Hall Of Fame - After Over 30 Years

Dallas Cowboys legend Drew Pearson was visibly upset after learning he was not part of the Pro Football Hall of Fame Class of 2020 during a watch party at his Plano home.

And I heard somewhere (can’t remember where) that this Centennial year is one where players like Drew who have been overlooked for a long time stood a better shot at finally getting in
You must log in or register to reply here.
Top Bottom
We've logged