Ex NFL player does an AMA on Reddit & shares his thoughts on Jerry Jones, etc

Nothing really earth shattering her that we didn't already know, but FYI nonetheless:

Jason Garrett was not the leader the Cowboys needed, but he is not the nucleus of the Cowboy's problems. Jerry Jones is. A players perspective.

In my short time playing in Dallas, I learned a lot about the circus environment that is the world of the Dallas Cowboys. Jerry World as we have come to know it, is the ever present dark cloud that will keep this franchise from reaching the levels of success they attained when they WERE America's team in the 1990s.

The Dallas Cowboys fail because they have an owner who has interjected himself in the daily operations of a professional sports franchise. True enough it is his team, but there is a certain level of trust that an owner needs to have in the abilities of his coaching staff to do the job he has paid them to do. Jerry is the final say on all personnel decisions. He is the spokesperson for the cowboys. The biggest fan of the Cowboys. And in the end, his decree is passed down as if he was the head coach of the Cowboys himself. His influence over the entire narrative for the Cowboys is undisputed, both in the media, and the locker room.

When I first walked into the Cowboy's facility as a free agent signing after leaving Jacksonville, I was filled with excitement, yet that would soon turn to annoyance, as I was constantly reminded of the privilege it was to play for the Dallas Cowboys. Posters, and signage plastered all around the facility pushed a message of prestige and inflated arrogance. And as a player who came from a small market team in the Jaguars, I could sense that arrogance a mile away. This was a narrative that was constantly shouted from the mountain tops while at Valley Ranch, not by the players, whom I got along with fine and had immense respect for, but from Jason Garrett and his staff. This was the moniker that no player could escape whether they liked it or not. It was as if we were in some alternate universe in which the Cowboys were defending Super Bowl champs. Except it was a falsehood.
This was a franchise that at the time (2014) had not seen a conference championship game since 1995, much less a Super Bowl championship. This was a franchise that had less playoff wins than the Jaguars franchise I came from over the course of the previous 19 years. It was quite mind boggling to me that the staff, headed by Garrett, was promoting a false culture around a mystique that had long since faded in the mind of those who lived outside the cultural bubble of the silver and blue. There is no doubt that the market of the Cowboys brand is the most powerful in sports. That market is based on an image that was built on the back of champions. That image is maintained by a hype machine that works in overdrive 24/7 and usually is more to the detriment of those on the roster than a benefit.

In the end, for better AND for worse, Jerry Jones is responsible for the constant failings of the Dallas Cowboys. The locker room in Dallas buckles under the immense pressure, and hype created by long past success. Long past success and nostalgia that Jerry himself is chasing. Until he decides to let go of that past glory and undisputed control/influence over the narrative of his team, changing coaches will not amount to the success he seeks. Until he steps back and lets go of the power he has embellished himself in, nothing will change. Until he allows himself to see the Dallas Cowboys for what they truly are, they will never be what he so desperately wants them to be. The Dallas Cowboys are a mediocre football franchise. A mediocre franchise with an extraordinary amount of talent. And that is solely the fault of the very man who long ago turned the silver and blue into a way of life. Jerry Jones. 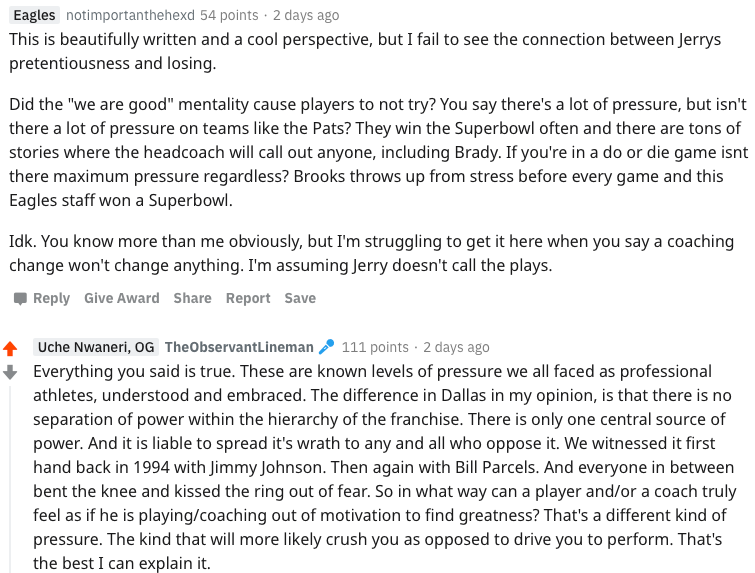 Good post. I think Parcells saw it tried to curb some of this entitlement attitude by making rookies "earn" the star.

The Cowboys franchise is a brand, not a football team, and Jerry Jones is a master marketer. It's more WWE than (purist) football and we've been suckered to believe it's real. It's entertainment. If you've seen football at other venues like Pittsburgh or even Philly, it's still football. I've come to despise the Dallas media and fan base, especially in Dallas, for giving Jerry, Red and company a pass. And most adult men who are alpha athletes probably look at the signs hanging around valley ranch as embarrassing and gay. Jerry, Garrett and all the other fools lack the self awareness to see that they are embarrassing themselves and their message falls flat.
R

That last sentence, "The kind that will more likely crush you as opposed to drive you to perform". That struck a chord with me.

Some jobs come with pressure. How you handle it is up to you, but your superiors play a role. It's there job to make you comfortable and inspire you to perform under stressful conditions. Not be oppressive and overbearing. That's when you start to see mistakes. It harms you mentally.

With all due respect amigo, I hear this said often and it strikes me as complete & utter BS

A so called "master marketer" would have a deep understanding of public relations and would never have bumbled the horrific image Jerry has with said expertise. He blew his image from the day he announced he was buying the team, the firing of Landry and just about everything since.

Further, who the hell listens to what that jackass says and then gets motivated to support the team, go to games, buy merchandise, etc?

I'd say the fan base is deep and wide and was cultivated by the great brand created by Landry, Schramm, Staubach, etc

The only so called genius of Jerry is buying the Cowboys in a depressed market and then endlessly milking the sweet, never-ending financial teat that is Cowboy nation who abides in spite of jeri, never because of him

Dodger12 said:
The Cowboys franchise is a brand, not a football team, and Jerry Jones is a master marketer.
Keep reading...

I couldn’t have said it better myself

I’m honestly surprised Jeruh hasn’t found a way to have himself a yearly T.V. show on the Cowboys. Something similar to the all or nothing or hard knocks type shows that cover different teams each season. He is missing out on a major marketing and revenue stream and that’s not like him.

yimyammer said:
With all due respect amigo, I hear this said often and it strikes me as complete & utter BS

A so called "master marketer" would have a deep understanding of public relations and would never have bumbled the horrific image Jerry has with said expertise. He blew his image from the day he announced he was buying the team, the firing of Landry and just about everything since.
Keep reading...

No disrespect taken. His image was restored after winning 3 SB's and he's lived off that ever since. While that has worn off from folks like us who know better, the new generation of fans has no idea what the Cowboys are beyond Jerry Jones.


yimyammer said:
Further, who the hell listens to what that jackass says and then gets motivated to support the team, go to games, buy merchandise, etc?
Keep reading...

Not sure how you can say this. You post at the other place. It's amazing the number of dolts who support Jerry, Garrett, etc. but they exists. They're real. And the Cowboys travel well. There are people who support the team and it's little more than entertainment for them and they buy merchandise by the boat load and keep lining Jerry's pockets. There's no debating that.


yimyammer said:
I'd say the fan base is deep and wide and was cultivated by the great brand created by Landry, Schramm, Staubach, etc
Keep reading...

Those names mean nothing to the new breed. Not a damn thing. They don't know the history of the team so they compare Garrett to Landry, Dak to Aikman, etc. That's the level of shear stupidity of the fan base. And many of the new fans, like my son, only exist because they inherited our love of the franchise from us. If I asked him who Tex, Schramm and and Brandt are, he'll have little clue and even less of a connection with them.

Sorry buddy, thats not how I see it.

People at the other forum (& everywhere I've read) are overwhelmingly against jeri except for a few idiots that seem to want to defend him as not being so bad or really not having anything to do with decisions anymore. I believe the majority of PSLs were paid for by fans who came from the generation in which Americas Team was born and were reignited from the 90's boom and then passed that love on to their poor kids.

I asked over there and elsewhere for anyone to tell me what Jerry has ever said or done that made them say to themselves, hell yeah, Im gonna be a fan of the Dallas Cowboys now! Or what has he ever said that gave them renewed optimism for any given season and its always crickets. Thats not to say there aren't some idiots that are fans of jeri, its just my belief that the money derived from those buffoons couldn't even pay the light bill at jeri's stadium.

Even those who don't hate jeri acknowledge he's a rambling buffoon, woefully inferior to the peers with whom he has to compete against but waive off his nonsense like the actions of an old senile grandpa or drunk uncle who everyone has to tolerate because he's part of the family. Most people seem dto have just given up the fight and even go so far to proclaim: "Jerry aint gonna take away my fandom". Well, Jerry is very happy to hear you say that.

I'll proclaim it until the day one of us dies that the overwhelming majority of all people are fans of the team in spite of jeri NOT because of him. No way in fucking hell is he a "marketing genius" and ascribing that to him is doing exactly what you despise: "giving Jerry, Red and company a pass" by not acknowledging the problem isn't that he's some slick marketer we all fall prey to instead of looking in the damn mirror and realizing its our continual support that allows the status quo to remain.

I'm not going to push this any further so suffice to say, we respectfully disagree
You must log in or register to reply here.
Top Bottom
We've logged