5 thoughts from Cowboys-Packers: Dallas defense puts forth its worst effort of the season 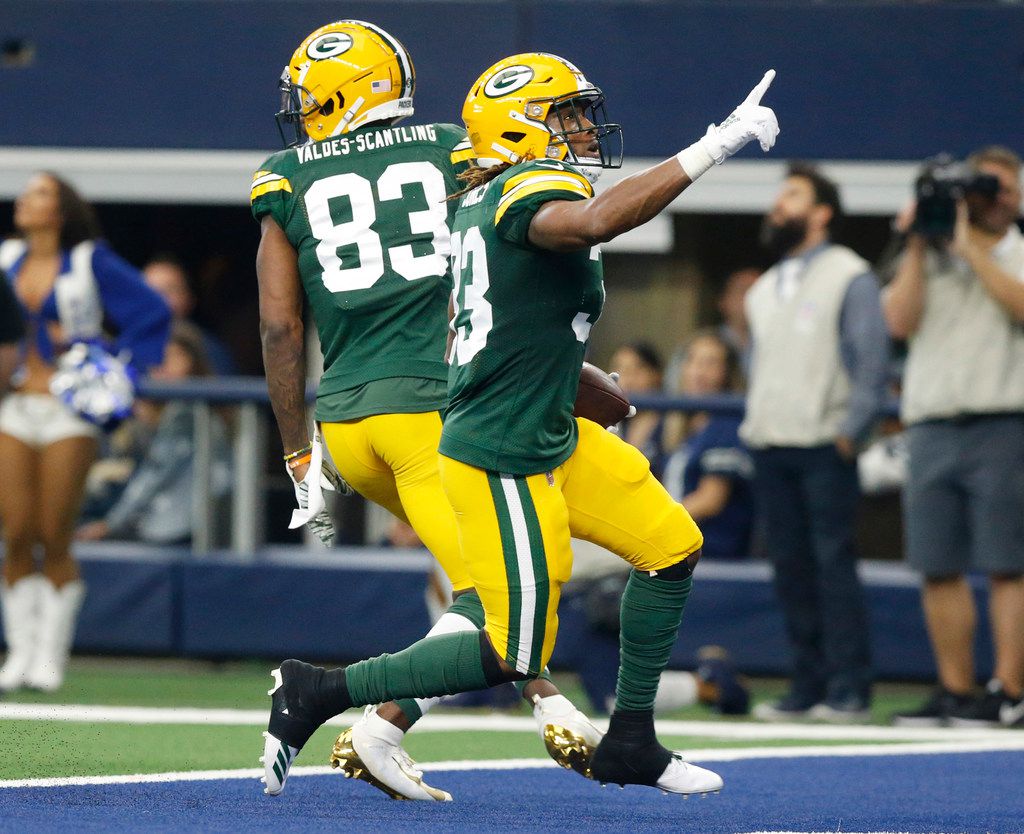 ARLINGTON -- To say a two-game losing streak is a crisis would be overstating things. But the Cowboys, after a 3-0 start against teams that most likely will be tanking for Tua Tagovailoa or another top-five draft pick, have lost consecutive games to the Saints and Packers. Green Bay defeated Dallas, 34-24, Sunday afternoon. The Cowboys are now 3-2 heading into a game next week against the New York Jets. It would seem when the Cowboys play teams on their level, the Packers and Saints, they can't keep up. Head coach Jason Garrett had a meltdown on the sideline near the end of the third quarter that probably summed his team's day up. Here are our five observations:

So, what does this all mean? Well, thank goodness the Cowboys face the Jets next week at MetLife Stadium, because if they had to face, say, the Eagles, Dallas may be headed to a three-game losing streak. If anything, we know defensive coordinators now have at least five games worth of tape on Kellen Moore's offense. The biggest misconception of the offense is that it's changed. It hasn't. This is the same offense the Cowboys ran when Garrett was the play-caller and continued when Scott Linehan took over. Moore is tricking things up and teams have figured the Cowboys out. Now he's got to make an adjustment to get things going. The bend-but-don't-break defense needs someone to make a play in the secondary, and when we mean a play, we're talking about creating a turnover. If the Cowboys are going to send just five or six rushers, somebody should be back there to snag a pass. But it's not happening.

Dak Prescott throws three interceptions: It tied a career high in picks for the Cowboys' quarterback, who was intercepted three times in a 37-9 loss to the Eagles on Nov. 19, 2017. On Sunday, Prescott's first pick came when a pass bounced off the hands of Amari Cooper and his second one happened when he tried to get a throw into a tight space to Randall Cobb. The final one, occurring in the fourth quarter as the Cowboys mounted a comeback, was due to miscommunication. Prescott threw a pass behind Michael Gallup but it was picked off Kevin King. It seemed as if Gallup was expecting the ball to be thrown to a different spot and stopped running his route. He was also getting held by King, and replays showed he got hit in the head. The referee's didn't call it, so there's that.

A poor defense: The Cowboys' defense had its worst effort of the season. Between the missed tackles, poor angles and the defensive front getting pushed around, the Cowboys just didn't have much life. Robert Quinn was pretty active but just couldn't get to Packers quarterback Aaron Rodgers. There was a thought that the Cowboys would have an advantage in the secondary with top receiver Davante Adams out with a toe injury. Not the case. Rodgers completed passes underhanded, left-handed, shuffle passes and threw them over the top. Elite quarterbacks make plays, and that's what Rodgers did. The defense responded in the second half with a more spirited effort, but in some ways it was too late.

The offensive line woes: With 7:34 left in the third quarter, the Cowboys lost starting right tackle La'el Collins to a left leg injury. He was replaced by Brandon Knight, who was making his NFL debut. The offensive line has some major problems now. They played without starting left tackle Tyron Smith (right high-ankle sprain) and he was replaced by Cameron Fleming, who struggled in pass protection. Fleming allowed two sacks to Za'Darius Smith and we can only imagine what his overall grade will be this week. But it's unfair to say this is on Fleming. The Cowboys are going to have to decide if moving Connor Williams to right tackle is the right call if Collins is lost for an extended period of time. If Smith isn't ready for the Jets, maybe moving Williams to left tackle is the answer. Yes, it's the Jets, but in the midst of a two-game losing streak, it may be time for some lineup changes.

The linebackers struggle: Leighton Vander Esch wasn’t good in space. Jaylon Smith wasn’t good in space. The two inside linebackers have regressed this season and at this rate, it’s hard to believe if either man will get Pro Bowl consideration. Vander Esch, of course, was a Pro Bowler last season and Smith had a strong season but didn’t make it. Back to this year for a moment: It appears running backs with the ability to cut back give Vander Esch problems, as this was the case with Aaron Jones on Sunday. This isn’t to say Vander Esch and Smith are bad players, they’re just not performing at the level they did last year.

lol, Jets will probably beat their ass too

everyone got paid or had their heads blow up, teams already toast after week 5

Setting this loss on the D alone has left me to wonder if he saw our Offense play the last two weeks. Our defense is only good if we are running the ball and playing keep away and let them rest more. In the past two weeks we have seen a lot of stalled drives due to passing and ineffective running. Until we are back to that, expect more of the same

On Sunday, the team hosted Aaron Rodgers and the Green Bay Packers, who eliminated the Cowboys from the playoffs twice this decade. With the game being one of only two scheduled for the 4 p.m. ET window, an emphatic win could have solidified the Cowboys’ status as a top-tier NFC team and Dak Prescott as an MVP candidate and exorcised the team’s demons in front of millions. That is not what happened. Dallas lost to Green Bay 34-24 in a game that showed us everything that makes them a Super Bowl contender, but also all of the reasons why they could fall short.

Dallas lost by 10, but the game was essentially over when the Packers took a 31-3 lead with 3:30 left in the third quarter. Both team’s offensive numbers were roughly the same at that point. The Cowboys Look Like Contenders—Until They Play a Good Team

After a 3-0 start, Dallas has dropped two straight against quality opponents

It was over for me, when they pulled Zeke in their first drive, who was on fire, to pussy-foot around with some passin' at that juncture.

bbgun said:
5 thoughts from Cowboys-Packers: Dallas defense puts forth its worst effort of the season
Click to expand...

Where did you get that article from?? (You didn't cite the source..)

The defense has been atrocious. Just because Dak throws an interception in GB territory doesn't mean the defense has to let them march down the field at will and score 4 rushing tds. What did they have 2 sacks barely any pressure and no turnovers again. I don't know why this defense gets such a pass when it clearly is in the bottom half of the league in most categories.
You must log in or register to reply here.
Share:
Share
Top Bottom
We've logged