DMN: Five takeaways from the Cowboys' win over the Redskins 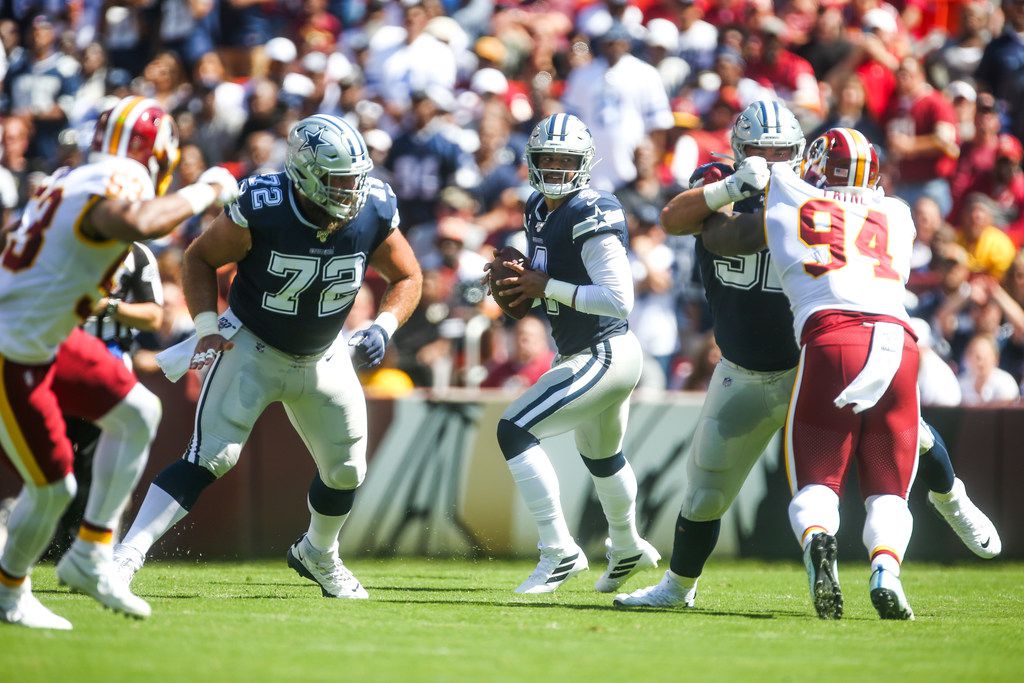 LANDOVER, Md. -- The Cowboys moved to 2-0 with a commanding 31-21 victory over the Washington Redskins on Sunday. Dallas' offense has stormed through the first two weeks of the season with more anointing oil being needed for offensive coordinator Kellen Moore.
With that, here are five takeaways from Sunday's victory:

Dak Prescott is near-perfect
It was a near-perfect game for quarterback Dak Prescott. Outside of an interception on a pass that bounced off receiver Randall Cobb's hands, Prescott's early-season results are getting better and better. He completed 18 consecutive passes, including a perfect 14-for-14 in the second half. Overall, Prescott completed 26 of 30 passes for 269 yards with three touchdowns and the INT. Prescott has seven touchdown passes through two games. In the first two games of his first three seasons in the NFL, Prescott has a combined four touchdowns and two interceptions. This is a much-improved quarterback we're seeing right now. Prescott's 42-yard run was a thing of beauty and we should see more of that.

Cowboys offense moving well
It's hard to duplicate what the Cowboys offense did in the season-opening victory against the Giants. Yet, the Cowboys, after their first three drives ended with no scores, produced points on the next five drives and you never got the feeling the game was getting away from them. There were so many bright spots, from Michael Gallup's six-catch, 68-yard effort, Prescott gaining 42 yards while keeping the ball on a run-pass option and of course the 51-yard touchdown pass to Devin Smith and the side-armed throw to him in the fourth quarter. The motion, play-action passes and offense line protection were fantastic. If you want to find any negatives, it occurred with guard Connor Williams, who was flagged for a holding call and struggled a bit in pass protection. The only other negative was the late third-quarter drive where the Cowboys moved the ball to the Washington 3 yard-line only to have to settle for a field goal.

Return of the deep ball
If you're looking for changes with the Cowboys offense, look no further than the deep pass. Prescott targeted Gallup on a long incompletion in the first half and connected with Smith on a touchdown. Prescott also had Jason Witten wide open for a long throw but threw a shorter pass. Prescott might have had a completion to Gallup, who was wide open after beating a confused Washington corner Josh Norman. Prescott threw the ball toward the sidelines but Gallup turned around too late and missed it. On the touchdown pass, Smith ran a skinny post and with no safety in the middle of the field, thanks to the motion of Amari Cooper, it allowed a one-on-one situation for the Cowboys. Prescott, with time, found Smith and the Cowboys tied the score 7-7. One of the better plays in the third quarter was Prescott finding tight end Blake Jarwin for a 22-yard pass down the field.

CB Byron Jones tested early
After playing 27 snaps in the Week 1 victory over the Giants, Byron Jones returned to full-time duty vs. the Redskins. He was tested early as Washington quarterback Case Keenum targeted him on a deep pass with the first play of the game. Jones was able to break up the pass. Later, Jones made a good open-field tackle, but he was beaten in single coverage later in the second half. Jones was beaten on the final score of the game with 2:17 left.

A possible roster opening
The Cowboys will need to make a roster move at some point next week. Robert Quinn comes off his two-game suspension for violating the league's PED policy. That means Taco Charlton or somebody else will be sent packing. Charlton, who was inactive for the second consecutive week, has been the subject of trade rumors of late. Charlton said he spoke with his agent this offseason about his future. When asked if he asked the club to trade him, he declined to say either way. Charlton only said he's produced good tape for teams and he knows his worth. We'll find out just where he stands with the rest of the league if he's dealt or released. However, an injury to defensive tackle Antwaun Woods raises some questions about the depth along the defensive line. Woods, the nose tackle, hurt his left knee with 11:15 left in the first half. The severity of the injury wasn't immediately known.

Correction: six. As in, NO takeaways. No turnovers for us. This is an alarming trend, if it stays a trend.

Doomsday said:
Correction: six. As in, NO takeaways. No turnovers for us. This is an alarming trend, if it stays a trend.
Click to expand...

Xavier Woods will never have an easier pick and still he couldn't reel it in.

If Taco knew his worth he'd know better than to use the words "good tape" in describing his play...
K

Doomsday said:
Correction: six. As in, NO takeaways. No turnovers for us. This is an alarming trend, if it stays a trend.
Click to expand...

Very alarming, especially since we face Rodgers, Brady, Wentz, Stafford during the season. DLine gotta step it up.

kwcoolk619 said:
Very alarming, especially since we face Rodgers, Brady, Wentz, Stafford during the season. DLine gotta step it up.
Click to expand...

Been a trend for a over a decade.

kwcoolk619 said:
Very alarming, especially since we face Rodgers, Brady, Wentz, Stafford during the season. DLine gotta step it up.
Click to expand...

Michael Gallop is going to be out 2-4 weeks. He needs minor surgery to get his meniscus scoped

Antwan Woods will be our 4 weeks with a sprained MCL

Scot said:
Michael Gallop is going to be out 2-4 weeks. He needs minor surgery to get his meniscus scoped

Antwan Woods will be our 4 weeks with a sprained MCL
Click to expand...

Not the best of news, but each is better than the alternatives...
You must log in or register to reply here.